Jaap Smid was born on the 28th of February, 1984 and raised in Gouda. Jaap’s family consists of an older sister Evelien (1981), a younger brother Koen (1989) and his parents Elly and Raphael.

Jaap went to the elementary school the ‘Vrijeschool Gouda’ in Gouda and then continued his school career at the high school the ‘Goudse Waarden’ ​​doing HAVO and MAVO. Jaap always required a lot of care and attention because he followed a “different path” to most children and adults around him. Jaap was also strongly attracted to the elements earth, water and especially fire.
In the beginning of 2000, when Jaap had just turned 16, tensions in the family grew because of Jaap’s adolescence. Jaap went to live with another family for a while, but still visited and joined in with family occasions. During this period Jaap was in the habit of using soft drugs and alcohol that usually did not suits him well. Jaap also dropped out of high school and started working. On July 2nd 2000, during a big illegal party at the river Lek at the bridge between Vianen and Nieuwgein on the A2 motorway, he climbed into the old arch bridge. While doing so, Jaap fell 30 meters and was very seriously injured. 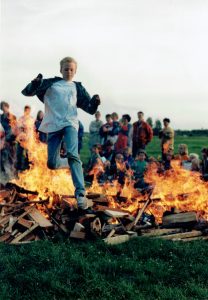 Jaap spent 3 months in the University Medical Center Utrecht – UMC needing intensive care. After which, Jaap was transferred to the Revalidation Center de Hoogstraat in Utrecht where he would stay for 9 months of rehabilitation. Due to his enormous fall, Jaap had an incomplete cross injury at the level of vertebrae L3 and L4 in his spinal column. Because of this, Jaap had to learn to live with limited blood flow to his legs and feet, partial incontinence problems and continuous (nerve) pain in his body. As a result, Jaap was hindered in his day to day life but lucky he could still walk and stand. After his recovery, Jaap never let his handicap restrict him and still undertook a lot of activities, which we as a family always admired.

Wheelchair basketball:
Jaap began his career at the Sport Club Antelope in Utrecht. First with the recreants and then grew to the 3rd, 2nd and 1st team of SC-Antelope. In 2004 Jaap joined Antelope’s 1st team to a European Cup 1 tournament. It was here that he realized there was still a difference between his game qualities, technique and physical qualities compared to that of the other players at this level. Extra motivated, Jaap went on to further develop his skills and in 2004 Jaap was offered another opportunity to join the National Dutch wheelchair basketball team to Japan.

Jaap received the status of a so-called 3.5-point player based on his limitation in the various medical and qualifying examinations. Because of this, his 185cm tall physique and game qualities he was placed in various teams at the position of Center Forward.  Jaap played for different Netherlands based clubs, international clubs and was also very active in the National Dutch wheelchair basketball team. He visited countries all over the world because of this; Belgium, Germany, Luxemburg, France, Turkey, Sweden, Spain, Poland, Austria, South Africa, Japan, China and Australia. 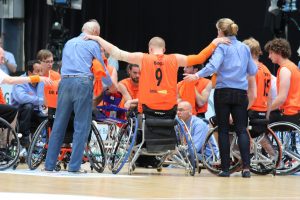 As previously described, Jaap began wheelchair basketball during his recovery and rehabilitation and worked hard to develop his technical, physical and mental level.
Jaap had his accident when he was only 16 years old and still in puberty. Due to his accident and the entire process afterwards he had to switch quickly to an early adulthood including all the questions and concerns regarding his social position and future. This didn’t exactly go easily, Jaap was still rebellious and felt that being an athlete and going to parties could still go well together! This led to frequent conflicts with his fellow players and coaches. Jaap could be very explosive and vulnerable in his feelings, insights and thoughts, often placing himself in a somewhat different position. Due to his hard work and effort however, he always managed to find his place in the team and earn playing time.
Initially, due to his age, Jaap was not able to drive to the trainings and competitions himself so his parents drove him. The further hi climbed the ladder of success, the more he had to train and play. Traveling though the Netherlands or to Belgium 3 or 4 times a week was a regular occurrence.

After a little insisting, Jaap eventually recognized the fact that he would have to study in order to be able to do something outside of “world” of wheelchair basketball. Jaap contacted the Johan Cruijff College (JCC) in Amsterdam, which is specially set up for abled and disabled athletes to follow an adjusted study program. Jaap started in Amsterdam where he had to travel to by taxi several times a

week. When he turned 18 and passed his driver’s test, a car was made available to him by the UWV (Institute for Employee Insurance) because of his career and study. He was now able to drive to Amsterdam, his trainings and competitions himself.  In 2007 Jaap joined a special training program from the NOC-NSF in Papendal, close to Arnhem, where he also lived for a while. Luckily he could join a new study at another JCC establishment in Nijmegen. This is where he successfully completed a MBO-4 study Marketing & Communication in 2010.

Then, in 2007, Jaap was asked to play for Hyeres in the south of France and this was the beginning of his international career. He was given an apartment there that he had to share with several teammates. He flew to Nice in the weekends on a regular basis to train and play in the French league and Eurocup. In addition Jaap still trained with his old club SC-Antilope in Utrecht during the week.

The adventure at Hyeres was relatively short lived but soon after, there was another club that was interested in Jaap. In 2010 he was attracted to a German club, Köln 99ers. During the first period in Köln he had to travel back and forth every weekend for competitions and during the week he still trained in Utrecht and/or with the wheelchair basketball club Arrow’s in Rotterdam. Later, Jaap got an apartment in Koln where he could stay for longer periods so he could train better with his team in Köln. Jaap played for two seasons in Köln after which he was asked to play for RSC Zwickau in East Germany. He played there for one season and was then offered a place in the Seportivo AMIAB team in Albacete, Spain. This is where he played a half season for the last time in 2013. 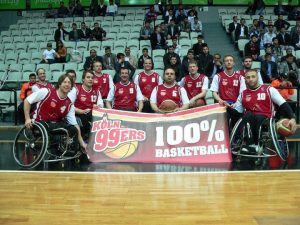 It wasn’t easy for Jaap to juggle everything at once. Training hard and playing well to make sure you were placed and earned playing time, interacting with team members and trainers, the developments surrounding his studies, his financial situation, the A-status within the sporting world, relationships and family matters. But above all, the constant (nerve) pain and physical restraints were a constant worry that cost a lot of energy and attention. It also gave him a lot of stress because he was well aware that he was at fault for the accident. Dealing with the many goverment agencies and regulations were to Jaap a great obstacle when it came to handling the sport and the accompanying activities. This difficulty with dealing with government agencies is experienced by many people with a disability in different degrees.

To support Jaap in several ways a foundation was set up, the foundation ‘Stichting Sporter Jaap Smid – SJS’, that had the goal of helping and facilitating Jaap financially, but also with his ambitions to make it far within the world of wheelchair basketball. Jaap, being socially involved, also wanted to introduce young people and adults to people with a handicap and the beautiful game of wheelchair basketball. He did this by giving demonstrations and workshops.

Jaap was the way he was and that was not always easy, for him or for his environment. As a family it was at times difficult to find the right tone to communicate to each other. The people who could “really see Jaap”, saw a person with an occasional uncomfortable way of interacting, but also great love for the important people around him and his wheelchair basketball. 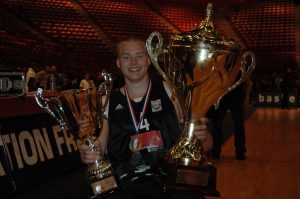 Life for Jaap became more and more difficult with all of the financial, sport related and physical problems stacking up. Despite all of the help it became too much for Jaap and at the age of 31 he took his own life on the third of September 2015.

The Dutch National Basketball Union – NBB described Jaap in a memorandum with the striking text:

Finally:
As Jaap’s family we look back with pride at the life and the sporting accomplishments of our brother and son Jaap Smid.

We are also very glad that we have found a place for the basketball wheelchairs that belonged to Jaap, and the chairs he used for the demonstrations and workshops. We are pleased that they are receiving a place with the wheelchair basketball team ‘the Bouncers’ in Gouda-Waddinxveen, and wish the Bouncers all the best and sporting success for the future.